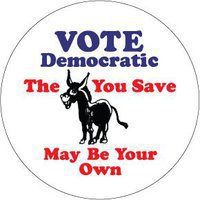 Many Christians in America align themselves with the Republican party. Once upon a time, I was among their number, but after a renewed commitment to my faith, I found that the more I studied and understood my faith, the more my old conservative ideology crumbled away. Today, I am convinced that the Republican party and its values are far from the values that God would have us embrace and that Republicans and many Christian leaders in America today have more in common with the Pharisees than with Jesus.

90 percent of the time, when you ask a Christian why he or she votes Republican you will find that a big factor is that he or she finds voting for a politician who supports abortion unconscionable. I’ve been there myself as a fellow pro-life Christian and know that the intentions are honorable, but the sad truth is that the issue of abortion is simply a political football in American politics. While Christian voters pat themselves on the back for pulling the Republican lever election after election, nothing has changed to stop the deaths of millions of unborn children every year and nothing will if Christians keep allowing themselves to be manipulated by politicians.

Consider that it has been over 30 years since Roe v. Wade, and we are no closer to overturning that decision today. More importantly, Republicans have had control of all three branches of government for six of the last eight years. From 2000 to 2006, we had a Republican majority in Congress, a Republican President, and 7 Republican appointed judges out of the 9 justices on the Supreme Court. And yet, no legislation was ever passed to challenge Roe v. Wade.

Instead of making excuses for the Republicans, we need to call a spade a spade: the abortion issue is a wonderful carrot to dangle in front of Christians to get their vote every election cycle, and the Republican party sees no reason to take that carrot off the table any time soon. Keeping things the way they are is a win-win because it keeps the Christian vote coming in while preventing the Republicans from experiencing the serious political damage that they should expect from any serious attempt to overturn Roe v. Wade. A majority of Americans support Roe v. Wade and have supported it ever since 1973 with little fluctuation. While sad, it is the reality that we face, and the Republican party is not going to risk turning off so many voters for the benefit of a voting block that they can evidently keep in their pocket with little more than lip service.

So where does that leave us if we admit that Christian voters are being manipulated for political gain?

Well, for starters, we need to realistically look at the limites of electoral politics. As indicated above, no political party is going to have the political capital to legislate the overturning of Roe v. Wade any time soon. When it comes to government actions, we are left with embracing policies that can reduce the number of abortions performed.

It so happens that policies that fight poverty supported by the Democratic party (and other left-leaning parties such as the Green Party and independents like Ralph Nader) and opposed by the Republican party can reduce the number of abortions because many woman get abortions out of a sense that they will not be able to financially support a child. Easing the economic strain of low-wage earners, making child-care accessible to single mothers for work and for school, and ensuring that all people can receive decent health care – these moral and Biblical issues of standing up for the poor while fully worthy as issues in their own right have the virtue of reducing the conditions that tempt people into getting abortions.

So if you are a Christian, consider voting next time for a candidate whose policies will better honor God’s concern for the poor and thereby better combat abortions, instead of voting for an empty promise.

Recently, my mother and aunt were discussing the bailout bill and the elections. They are both Obama supporters although my mother traditionally supports Republicans. My aunt asked my mother for whom I was going to vote come November. When my mom told her that I would be voting for Ralph Nader, my aunt said: “Oh. So he’s going to waste his vote.”

In order to have any meaningful discussion about what it means for a vote to be “wasted”, we have to understand what we intend to accomplish by voting. We are constantly told by the media that voting is our chance to express ourselves – our chance to stand up and be counted and heard. While I submit that voting is a pretty sad excuse for political expression, let’s run with this common notion about what voting means.

If I am to have any chance of expressing myself politically and supporting those political ideals and practices which I hold dear, then rationally speaking I need to vote for the candidate whose ideals and actions line up most completely with my own. I have thoroughly examined the positions and political history of John McCain and Barack Obama and find both candidates quite disappointing. On the other hand, I find Ralph Nader matches up quite well with me on issue after issue. Thus, given our established criteria for the meaning of voting, I would be wasting my vote if I did not vote for Ralph Nader.

The way supporters of Barack Obama talk sometimes you would think the most important thing about voting is to make sure you vote for the side that is going to win! Now that’s what I call a wasted and meaningless vote.

Voting for the lesser of two evils gets you nothing but an endless circle of evil.

Vote for the candidate who best reflects your ideals or don’t vote at all.