So I flew to Chicago on Bastille Day to see one of my favorite bands: the Swedish melodic death metal gods At The Gates. Initially, I had my hesitations about traveling from Atlanta to Chicago to see a concert – but ultimately the additional benefit of visiting a friend whom I’ve not seen in many years together with the one-chance-only kind of event that this concert represents (At The Gates broke up in 1996 and this is their “Suicidal Final Tour”), I went for it and purchased my tickets back in April along with a plane ticket and a hotel reservation.

My flight ran a little late so I didn’t actually get to my hotel until around 4:15 by which time I was pretty much guaranteed to arrive too late to see the opening band. This turn of events didn’t really bother me too much as I was only going to the concert to see one band and that band was the headliner. After dropping off my luggage at the hotel, I caught the airport shuttle back to O’Hare airport where I then took a CTA blue bus to Rosemont station. There, I finally caught the CTA blue line train which took me into downtown Chicago where I easily found my way to the House of Blues after a quick detour for some McDonald’s. 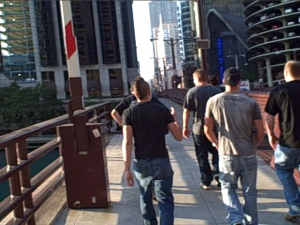 When I entered the building to pick up my tickets from the Box Office, I could hear that the first band was already playing on stage. Apparently, they keep a tight schedule either on this tour or at The House of Blues in general. The concert doors opened at 5:30 and it seems that the first band Toxic Holocaust began playing at 5:45. As one guy waiting in line with me commented, that’s pretty amazing for one of these shows. Usually, you stand around for a long time after the doors open before any music starts and often there are long periods in between bands.

With ticket in hand, I headed into the club and made my way to the back where I purchased for myself an At The Gates “Suicidal Final Tour 2008” t-shirt. By the time I finished and returned to the main concert room, the first band had packed up and been replaced by the night’s second act: a neo-thrash band called Municipal Waste. They were actually quite entertaining with their tongue-in-cheek lyrics and more-Slayer-than-Slayer sound. The place was already packed to the point of bursting so I had to enjoy the band from way back near the bar, but I still found the view good and the band’s energy and songwriting won me over quite quickly which usually doesn’t happen with opening bands that I’ve never heard before. For the last song in their set, their energetic front man eagerly whipped up the center crowd into a frenzy with calls to form opposing sides that smashed together in a ‘wall of death’. He then followed up with a call for the crowd to form a “circle of pain”. Quite thrilling stuff to watch from a distance although it makes me pine a bit for the time when I may have leaped into the fray myself.

After Municipal Waste wrapped up their show, there was a huge stream of metalheads flowing from the center of the crowd out towards the edges of the room where bars and restrooms stood to receive them. This temporary dispersal gave me the chance to make my way to a nice position just three to four bodies away from the stage where I often find myself as I never seem to arrive early enough to actually make the front row. Having staked my claim to a nice spot near the front, I planted roots and was ready for At The Gates to take the stage.

Unlike most concert venues that I’ve attended, the House of Blues has a big curtain on the stage that they use to hide the stage in between acts. So as the thinned crowded began to fill up again, we could hear the sounds of stage crew testing out various instruments and the mikes but all without actually seeing the, and therefore there were no incidents where some excited fan mistakes a roady on stage for a band member heralding the start of the show.

When the filler music cut off, it wasn’t At The Gates that took the stage.  Apparently four bands were performing on this leg of the tour despite the bill on listing three. The penultimate act was a band called Darkest Hour. They struck me as another generic and uninspired metalcore band with nothing that really hooked me. However, there were several people there who seemed to be really into them, and perhaps, they might have faired better with me if I had been more familiar with their material. Given that I was not, I simply tapped my foot politely and occasionally nodded my head to the beat while waiting for them to leave the stage and make way for At The Gates.

During the next round of filler music between acts, I and apparently several other fans were pleased to hear Slayer’s Angel of Death blasting from the speakers (a MIDI-based sample of this track is my current phone ringtone). A large group of fans standing behind me matched singer Tom Araya for every word and scream during this classic thrash track, and I found myself joining along before the end of the song. After that song finished, I was excited to hear the opening riffs to another Slayer song – God Hates Us All – only to have it cut off abruptly. At first, this was a welcome sign that At The Gates would play soon which summoned forth a lot of excited cheers, but these cheers turned to a few boos and a sigh from myself as the excellent Slayer track gave way to a merely okay Pantera song Walk.

But before this song could quite finish, the speakers went silent, the lights dimmed, and the curtains drew apart. At the Gates were ready to take the stage! This was the moment that many of us had waited twelve years to see – a moment that it seemed might never happen with this group long gone to the dustbin of broken-up bands. After a few heartbeats of atmospheric sound samples, the band members had all made their ways to their assigned positions on stage and without further delay, they burst into a blistering rendition of Slaughter of the Soul.

Instantly, I knew this was going to be a rough but thrilling crowd. Within seconds of the sonic attack, the mass of frantic fans behind me crashed forward like some wave of human bodies, and I found myself being crushed into the people in front of me, struggling mightily with my arms around my torso in an outward straining embrace designed to keep me from getting squeezed like a grape in a wine press.

It’s at moments like these when you’re sweating like crazy, your heart is thumping for all its worth, and your limbs are energized by the primal violence of the music that you truly capture the complete feel of the metal concert experience in all its adrenaline powered joy. While sometimes uncomfortable, the overall experience eclipses any minor nuisances like having an elbow slammed into your kidney or the flailing foot of a crowd surfer slapped against the back of your head.

Next up, the band smoothly moved into Cold followed by the excellent Raped By The Light Of Christ off their second album With Fear I Kiss The Burning Darkness. This is a “slower” song as At The Gates songs go, and so the crowd settled down a notch giving me the “pause” necessary to attempt recording some video with Melinda’s Flip which she kindly allowed me to take on this trip.

It would have all worked out marvelously, and by rights, I should have been able to post a link to a nice clip on YouTube featuring the band’s awesome performance. All of this would have been so if I had actually managed to press the Flip’s big red record button properly. Unfortunately, I only succeeded in turning on the Flip itself, and my pressing the button didn’t quite take hold so even though I held the Flip up and made every effort to move it around to capture the action of all the band members – I was actually capturing squat. Towards the end of this song, the Flip decided to shut down seeing as unlike me, it was perfectly aware of its idle state and decided to conserve energy. Puzzled (I didn’t figure out what had happened until I got back to my hotel room), I turned the Flip back on, and this time successfully hit the record button so that I managed to capture a measly fifteen seconds of the song’s end.

Oh well. At least, I managed a decent screen capture from that footage: 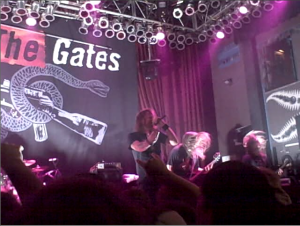 At The Gates continued ripping through songs from all of their releases including my favorite All Life Ends off their first release the Gardens of Grief EP. Every song they nailed with precision like the versions found on the albums only with that extra energy that gets captured in a concert setting by the best of bands.

For the encore, they performed three more songs kicking things into overdrive with Blinded By Fear during which crowd surfers started getting tossed like crazy and the churning swarms of moshers acted like a giant vortex that threatened to suck me into its hungry maw on a couple of occasions. Next was Suicide Nation, and in keeping with the concerts from their early days, they finished with the awesome Kingdom Gone.

At the end, the band threw a few things into the audience such as guitar picks, drum sticks, and the set list. One lucky person managed to grab both a drum stick and the set list and posted a picture of them on MySpace:

Afterwards, I left an exhausted but very happy man. This was pretty much the best concert that I’ve had the pleasure to attend, and I half-seriously looked online to see about booking a flight to Houston, Texas to see their next show this Thursday, but ultimately I couldn’t justify the costs of the airplane ticket let alone the price of a hotel.

It seems that like another fan commented bittersweetly, this was my first and last time seeing this amazing band play live.

I can only hope that they follow up the tour by releasing some an awesome DVD with footage from various shows!